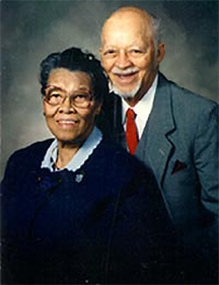 “In the Front Range, there is no better source of current information on race relations than the annual Byron & Christine Johnson Lecture Series. At the start of each year, the guest speakers inspire us to think of, and strengthen, our local inter-racial community.”

“The lecture that stayed on my heart for a long time was the one on Women in the Struggle [March 2002]. The two women from Corky Gonzales’ school [Troylynn Yellow Wood and Nita Gonzales] gave me a newer sense of commitment to my own heritage.”

“What stands out for me about the lecture series is that it’s a presentation of issues and subjects that you wouldn’t hear about anywhere else. It’s just tremendous.”

“The lectures opened up a whole new world for me because we discussed areas that I never really knew anything about. It was a big help for me in what I’m trying to do.”

“The lectures I enjoyed the most were the ones on Frederick Douglass and Black Indians, Frederick Douglass [January 2004] because I enjoyed studying him in conjunction with Dr. King, and Black Indians [February 2004] because I hadn’t known anything about that history. Also, it was good to be in a space where you could learn from people of different ages. As a student, when you see elders coming in asking questions, it brings a whole new perspective to things.”